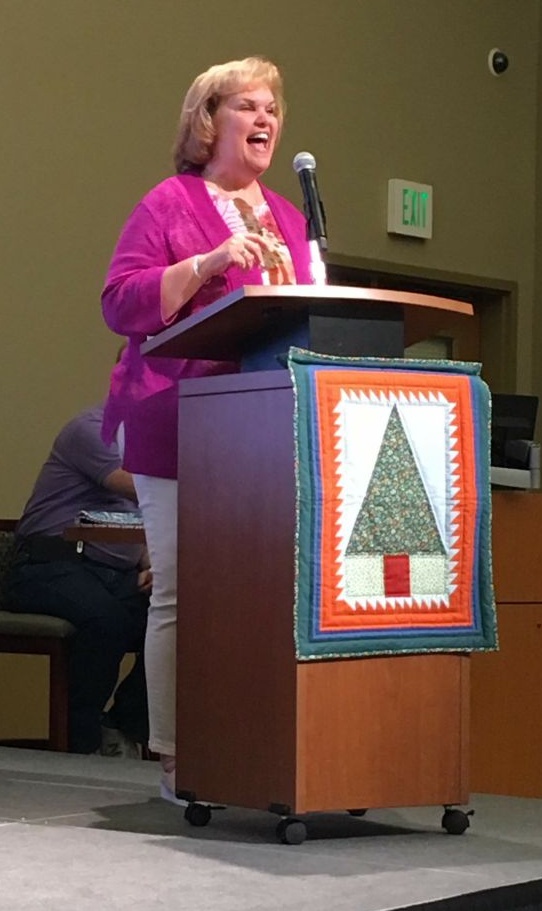 Me, having fun with the audience at the Washington State Quilters Guild. Photo courtesy of Robin Waggoner

I had a wonderful time at an event with the Washington State Quilters’ Guild last week. I presented two lectures and two full-day, sold-out workshops to guild members who simply couldn’t have been nicer or more fun to be around! It was a great time and I enjoyed every moment. This state guild is active, vibrant and filled with so many talented people. I was blessed to spend three days with them, getting to know many of them personally.

At the first workshop I met one of the members, Patty Markley, and as I got to know her a bit better I found out she is not only a quilter but she is actively involved in a local tatting guild in the Spokane, WA area.

I’ve always been fascinated with tatting. My very distant cousin, Ruth, was an amazing woman. I met her once when I was a little girl and she was quite old at that time. She did all sorts of needlework and she was an amazing tatter. My Mom had one or two of her tatted doilies and linen napkins with tatted edges, all expertly done by this sweet, distant relative. I inherited them when Mom passed away and I treasure them. They are very old, fragile, and I dare not use them for fear of them falling to bits if they are ever washed.

Once, shortly after Kent and I were married, I decided to learn how to tat. I signed up for a local class in Alexandria, VA, and bought a shuttle and cotton tatting thread. I spent six hours working diligently in class and by the end of the day, I only had an inch and a half of simple tatted lace. It was so difficult; I didn’t inherit any of Cousin Ruth’s natural talent so decided I was better suited to quilting. But the experience and hard work in class — and the resulting 1 1/2″ of lace to show for it — made me appreciate how amazing tatted pieces truly are and for those who have the skill and patience to do it well.

Fast forward to meeting Patty last week in class. She showed me photos of some amazing tatted pieces including an exquisitely tatted hand-held fan by someone in her active tatting guild. It recently won best of show at a national contest; I couldn’t get over how beautiful all the examples of tatting she showed me were! 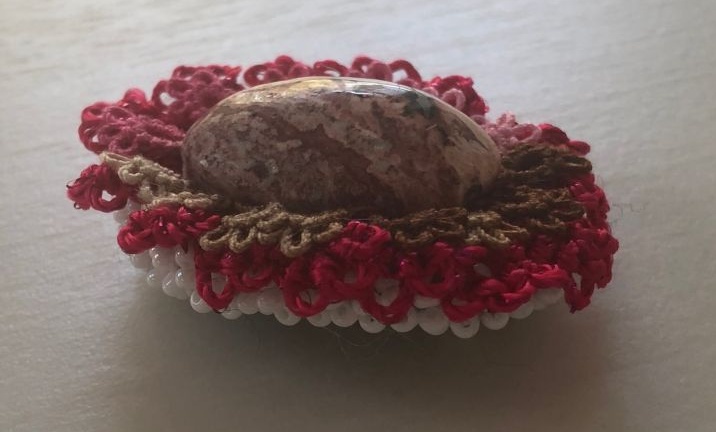 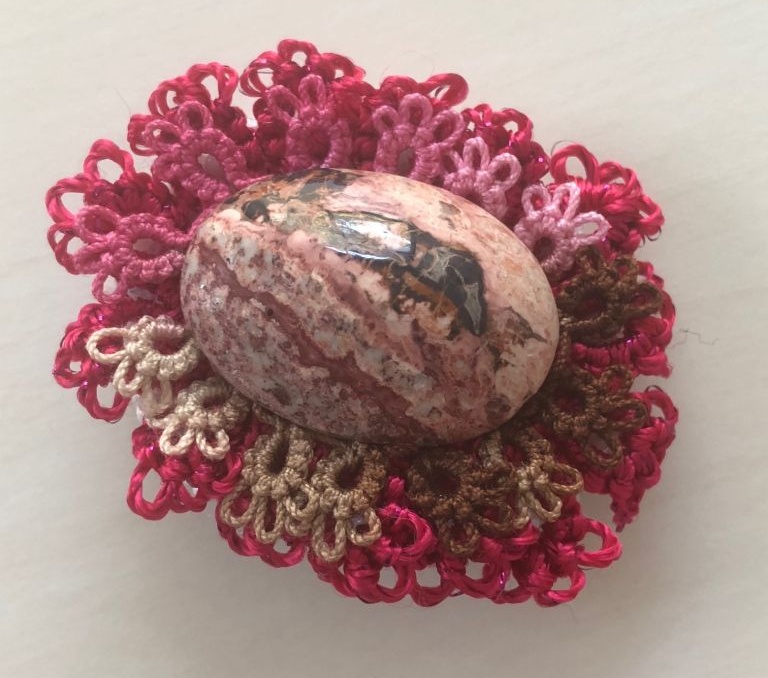 The next morning when I arrived ready to teach at the second full day workshop and I was surprised to find a beautifully wrapped gift on my table. It was from Patty and it contained an exquisitely tatted brooch with a pink stone in the middle plus a jaw-dropping doily, both expertly tatted by her! I was positively gobsmacked and overwhelmed to the point of tears to receive such an amazing gift from her heart and hands to mine. 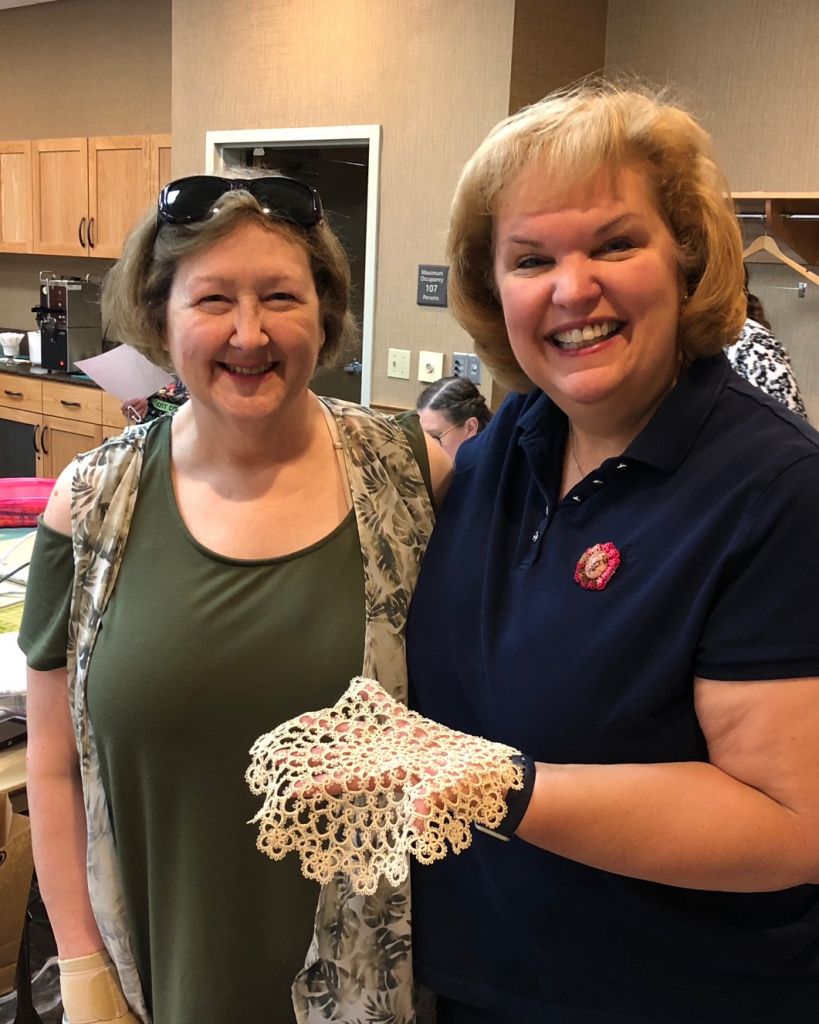 Patty Markley and me

She told me doilies are typically what tatting has been in the past and tatted jewelry is what tatting is becoming in the future. She said many of the younger women in her group are experimenting with combining tatted bits of trim and lace and jewelry together for something modern and well-suited for today’s tatters and busy craft enthusiasts. 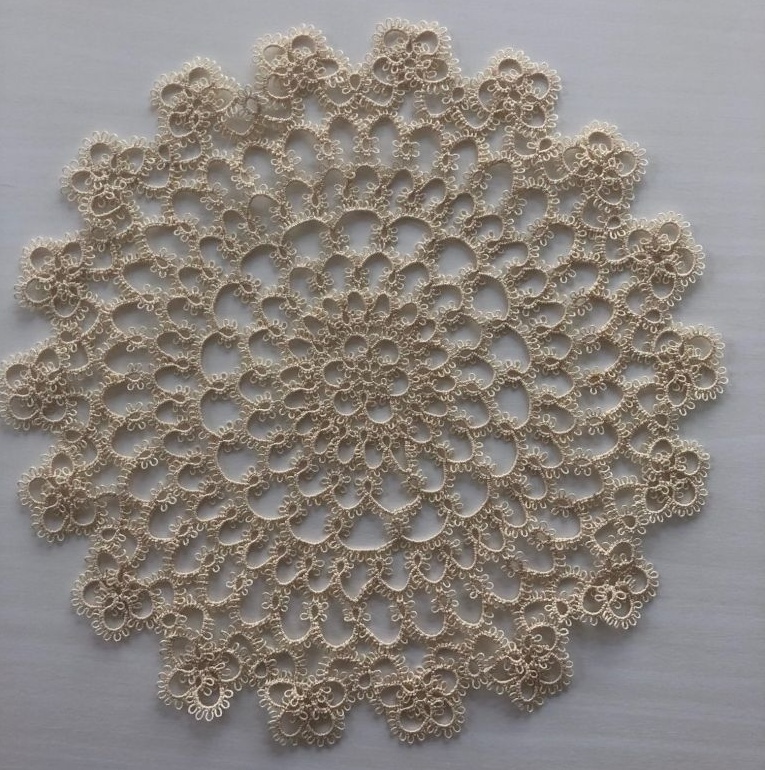 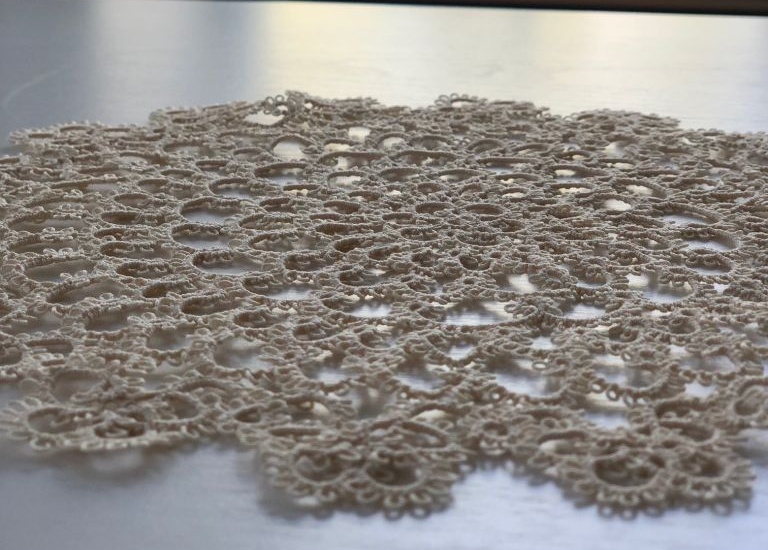 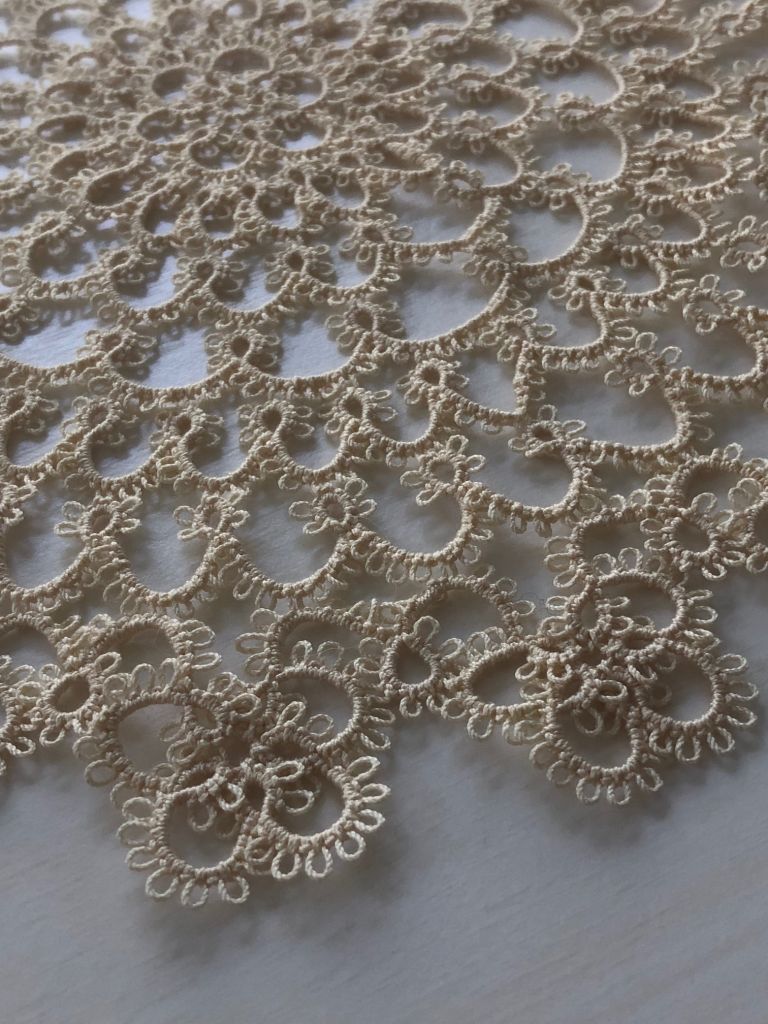 The intricacy of the stitches and pattern is stunning!

Patty’s tatted doily has a place of honor in my new studio and the brooch looks amazing pinned on the collar of my favorite denim jacket. I will treasure them both including my new friendship with Patty. Such an unexpected kindness! THANK YOU, Patty! You truly have a gift not only for tatting but for touching hearts with your thoughtfulness and kindness!