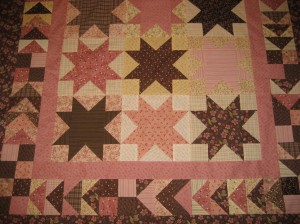 Pink and brown Sawtooth Stars made with fabrics from Henry Glass

We quilters know the term U F O’s means unfinished objects. Some people cringe at the word. UFO’s can be pesky little reminders that we didn’t complete a task we originally set out to finish, and this makes us feel guilty. I have many UFO’s in my studio tucked here and there, organized, and stored neatly in plastic “pizza-sized” boxes. About six years ago, I actually sat down and counted the exact number of my UFO’s and I’ll admit I counted more than 30!

Since that time, the total number of my UFO’s hasn’t changed all that much (plus or minus four or five at a time) and no matter what I do, I always seem to have a large number of UFO’s at some stage of completion. Don’t misunderstand — I’m a prolific quilter when you count the number of quilts I actually finish during the course of a year.  But I begin quite a few more quilts than I finish; hence, the propagation of more UFO’s.

Lately, however, I’ve been tackling those UFO’s at a great rate. They are getting DONE. It began about three weeks ago when I pulled out a project I have been meaning to complete for a long time. I needed to finish piecing some friendship blocks for some dear quilting friends from my group back at Wright Patterson Air Force Base in Dayton, Ohio. Over a year ago, I was the lucky recipient of 19 – 12″ Ohio Star blocks from my friends in the group; and I still owed 14 blocks to some of the ladies. One night, when I was too bleary to work on my current quilting projects for McCall’s, I pulled out my burgundy, blue and cream fabrics late one evening and got to work making Ohio Star blocks.

To make the time go more quickly, I enjoyed a Jane Austin DVD fest in my studio and over the next several days I watched Emma, Sense and Sensibility, Pride and Prejudice (my all time favorite!) and Becoming Jane. I didn’t watch the movies all at once or even straight through each one. There were LOTS of little interruptions along the way. But I simply pushed the pause button — and my Austin heroines were waiting for me right where I left off when I had a few spare moments to work on those blocks throughout the day or after the boys were in bed at night.

What had seemed like a daunting task when I began, quickly flew by and before I knew it I had completed 15 – 12″ blocks (one extra block to round out my 19 to an even 20.)

When the Ohio Star blocks were finished, squared up, signed, packaged, and mailed to Ohio to the deserving recipients, I kept the momentum going. I dusted off the top of the next plastic pizza box and opened it. Another quilt top finished. Then a third. And yes, a fourth.

I’m working on my fifth UFO now — a soft, feminine, slightly country pink and brown muted Sawtooth Star quilt I began over two years ago when I was working on the design of my ruler, the Easy Star and Geese Ruler. These colors are certainly not my typical favorites (I tend to prefer clear, strong, saturated colors; and I love batiks) but what is so wonderful about quilting is you don’t have to make quilts in your favorite colors or in fabrics that will match your decor “just so.” With quilting, you get to try out new color combinations and experiment with fabrics that aren’t typically “your style.” These pink and brown fabrics by Henry Glass caught my eye way back in 2006 and they are just as fabulous now that I’ve pulled them out of their box. I set the Sawtooth Stars horizontally side-by-side, and had originally planned to add a straight border of a coordinating floral fabric. But I had so many triangles and small squares left over, I decided to make an inner border from scrappy flying geese and four patch units before adding the outer floral border. I think it turned out beautifully! 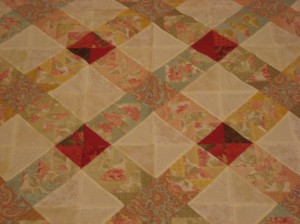 I can’t describe just how good it feels to be working on  — and COMPLETING — these long awaited UFO’s. It is such a glorious feeling of productivity! It has spurred me on to think more creatively; which is a great side bonus because I have deadlines looming to design and create several new quilts for large national shows where I’ll be teaching next year along with two more magazine features. My UFO’s have sparked excitement in my mind and I’ve got ideas swirling everywhere. I can’t wait to see what I’ll create next.

Hopefully, though, I won’t create any MORE UFO’s!