Simply done is better than half begun

It was Friday night “Sit and Sew” night at Scrap and Sew. I had signed up to attend weeks before but now, on Friday afternoon, I couldn’t decide what to take with me to stitch. The two major projects with pending deadlines I am currently facing require too much thinking and my brain wasn’t quite ready to tackle all the math during a low-key, laid back, social event. I almost didn’t go because I just couldn’t decide what to take.

So, I opened my UFO closet. (Yes, I have a UFO closet. Don’t judge.) What to do, what to do…. One pile of small 6″ blocks caught my eye. Gosh, I hadn’t noticed them in years. Years. As in more than a decade ago. That’s right — I’d received these particular blocks from an exchange with new quilting friends in the year 2000 in Ramstein, Germany. There were six of us in all and we each made 8 sets of 6 traditional “T” blocks to exchange; at the end of which we’d all have 48 different blocks. One of the gals finished her quilt right away with an original setting which ended up being published in McCalls Quilting Magazine. I had always planned to create a stunning, original setting for these pretty blue-and-cream blocks but simply never got around to it. So before long, the blocks were relegated to my growing pile of UFO’s.

It was already 4:30pm and I was supposed to leave within the hour for the Sit and Sew. Without any more deliberation, I grabbed the stack of those 6″ blocks, some off-white fabric from my stash and two blue fabrics I thought might make good borders, and headed for the door.

Once at the shop, I dove right in. So what if I didn’t have a stunning, original setting for these blocks? I laid them out simply in a design of four blocks each and stacked them up next to my machine and began to stitch. I paid no attention to the color choice within each 12″ block. (I did, however, pay attention to the block orientation within the larger block setting.) It didn’t take long until I had 12 – 12″ blocks. Then I began to stitch those 12″ blocks together in a simple 3 x 4 straight set block layout. Nothing fancy. Nothing difficult or out-of-the-ordinary. The quilt top went together in no time at all — made to seem even quicker because of the chatter going on around me. We were all talking, sharing, laughing, and having fun just hanging out with other quilters who were working on their own UFO’s.

By 10:30pm, I had finished the top, pieced the backing, made a hanging sleeve and finished making the binding. Aaaahhhh. What a wonderful feeling of productivity and accomplishment! And guess what? Even though those little almost-forgotten 6″ blocks didn’t end up in some amazing, new, out-of-this-world original setting, they are now part of a lovely quilt with a charm all its own. And they are no longer languishing as a UFO.

That’s the best part of all. 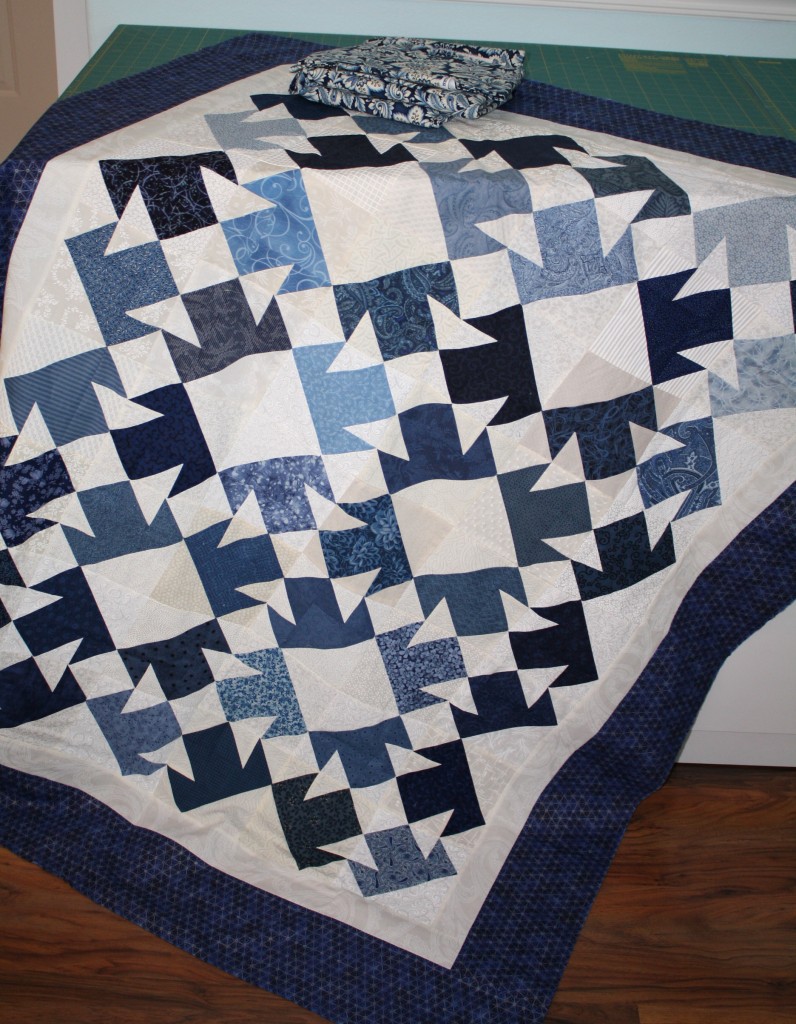