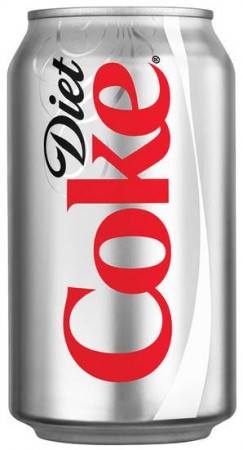 It’s a rather strange heading for a blog post, especially when this blog is supposed to be about quilting. But I thought I’d share the journey I’ve been on recently concerning my, dare I say “addiction” to Diet Coke? 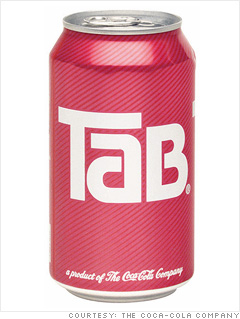 It all began when I was around 4 or 5 years old and I’d sip my Mom’s Fresca. And when I was a little older, Tab came on the scene. I was pretty much hooked from that day forward.

4 bottles or cans (or more) per day. Living through it, it didn’t seem to be that bad or out of the ordinary. Writing it down and reading it as I type, I can see just how damaging this “habit” has been. I consumed diet sodas every single day of my life for more than 40 years! Unfortunately, I married a guy who doesn’t drink coffee and likes diet sodas as much as I do. And the pattern repeated itself with my boys taking sips of my Diet Coke when they were little until they, too, became addicted.

For a long time now I’ve read more and more about the dangers of artificial sweeteners such as Aspertame. I tried to ignore these warnings at first, but it soon became harder and harder to ignore. We talked about giving up diet sodas as a family for a long time. Days turned into weeks which turned into months, and months into years. We kept saying, “We’ll give them up after ______.” Or, “Let’s not quit right now because we’ve got this big ______ to deal with and it would be too stressful to quit now.” Hmmmm. Sounds an awful like ADDICITON to me.

Finally, my husband and I decided it was time to JUST QUIT. The date of the last diet soda we drank was February 23rd (but who’s counting?) It was H A R D to give up. The first week it honestly felt like we were going through withdrawals. We were all extra irritable, suffered from headaches, and had trouble sleeping. But after the first week or so of drinking water (or a glass of skim milk), it got a bit easier. I had an occasional cup of hot tea with a little milk (without artificial sweetener) but as the weather warmed up, I really wanted to find something to sip on throughout the day other than ice water. Yes I do drink a lot of (filtered) ice water and it is refreshing, no doubt about it. But I still missed having something else to drink that isn’t harmful.

So I began reading about “infusing” water with different fruits and I decided to try infusing fresh brewed iced tea. I’ve come up with the best formula and I make about three or four of these pitchers a week and keep it in the refrigerator. SO delicious! If you’re thinking about giving up diet sodas or you just enjoy drinking delicious iced tea, I hope you’ll give this simple recipe a try. 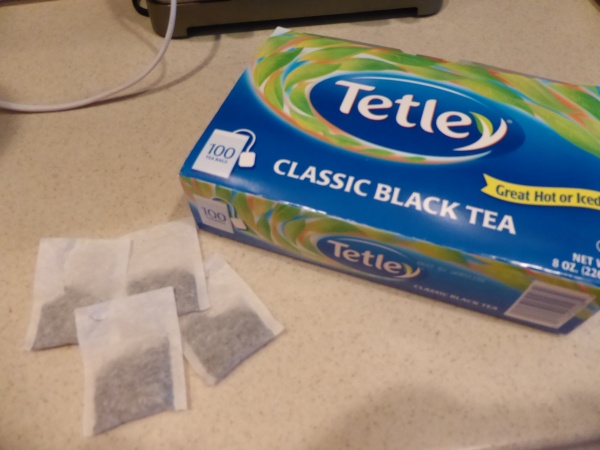 I use an Iced Tea Maker (similar to a Mr. Coffee) to brew my tea, but the measurements would be the same if you brew your own in a pan on the stove. I have tried ALL the major brands of black tea but find that Tetley’s classic blend is by far the best tasting. Use 4 tea bags of whatever brand you like best. 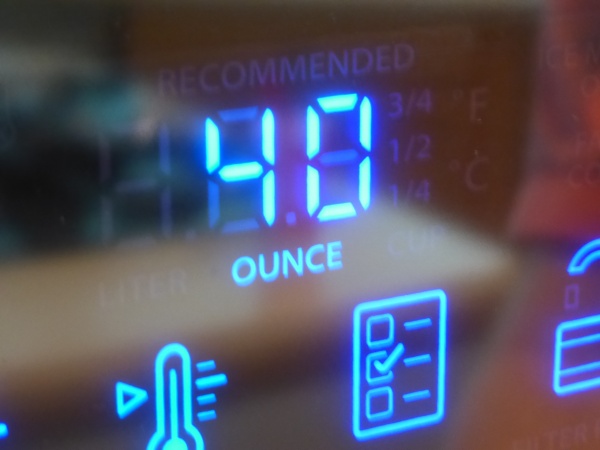 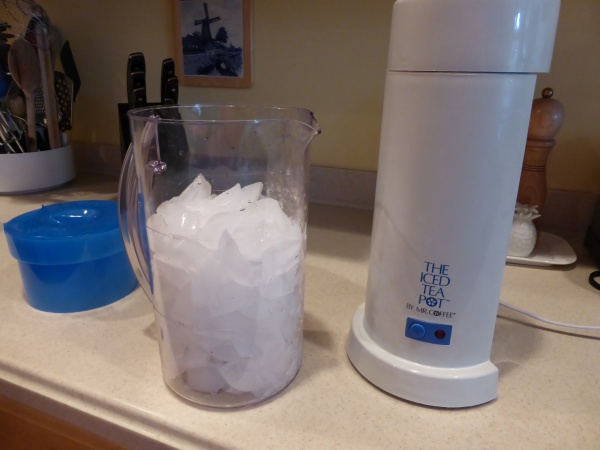 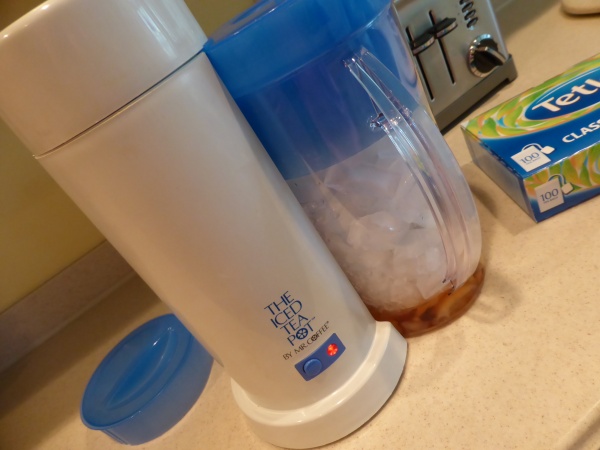 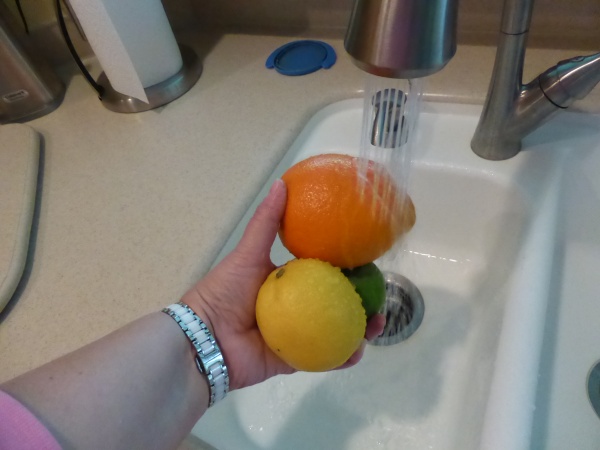 While it is brewing, wash one lemon, one lime and one orange or one tangerine. 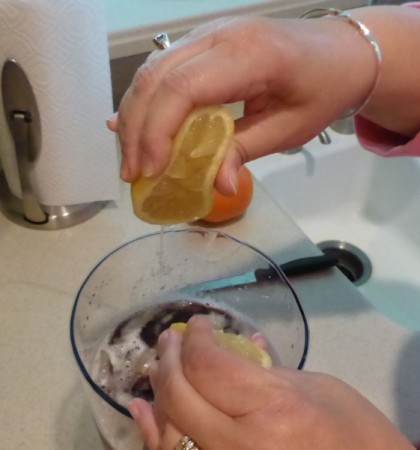 As soon as the tea has steeped, cut the fruit in half and squeeze the juice into the tea.
Add the lemon… 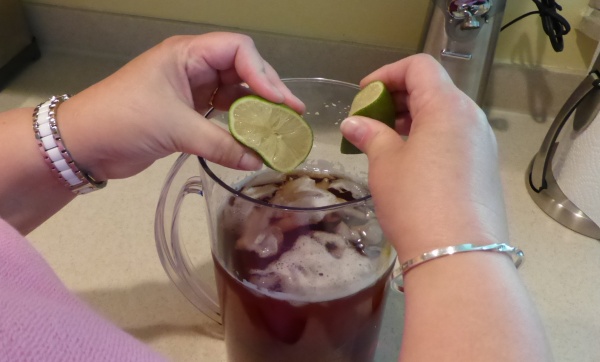 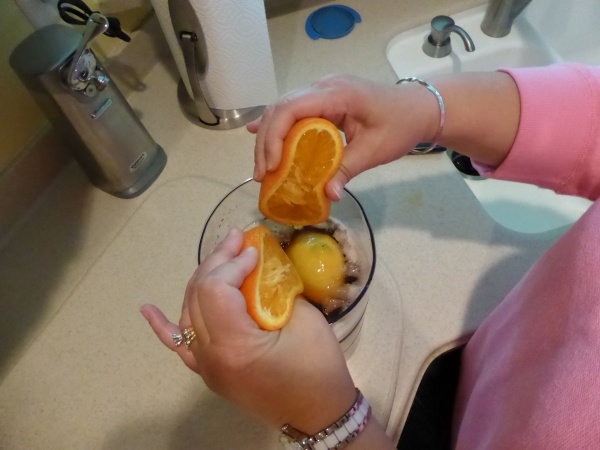 ….and the orange. Be sure to hold out your pinky. (Just kidding….what’s with that, anyway?) 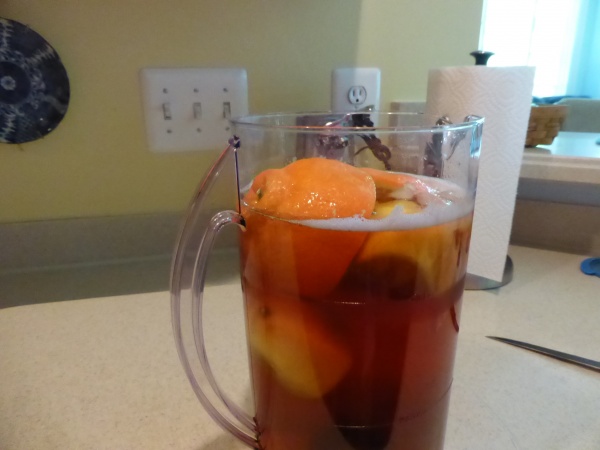 Leave the fruit in the tea and put in the fridge to really ‘infuse.” 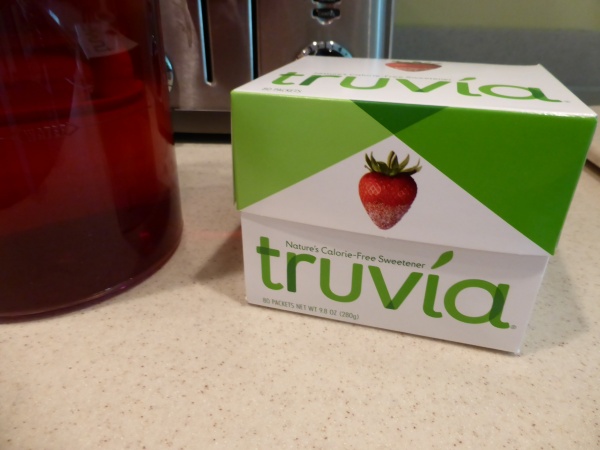 You can use a little Stevia (a natural sweetener) if you’d like. 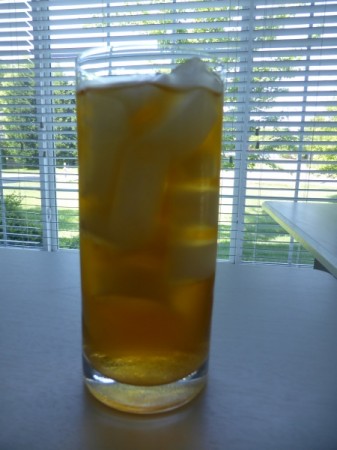 Absolutely delicious. And I no longer crave diet sodas. As a family, we’re much healthier and that makes me much happier.

…what I’m working on in my studio right now? 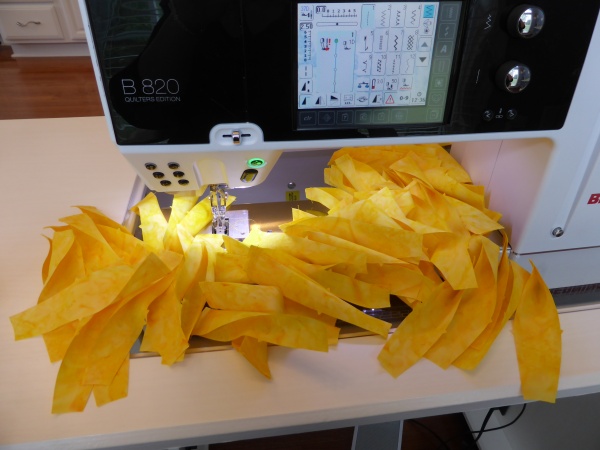