I want to thank you all so much for the many wonderful and heartfelt comments left here on the blog and also on my Facebook page. I’m tickled all the way down to my toes that the blog about my Dad and his new bike had such an emotional impact on many of you! Funny, though — I thought last Sunday was Father’s Day and instead I found out that next Sunday is the actual holiday. Well, I’ll just celebrate Father’s Day all week long in honor of my Dad, who I love so much.

Several of you wrote to ask about the story of Dad’s pet rooster, Henry. So I asked his permission to share the story – in his own words – of his cherished feathered friend. 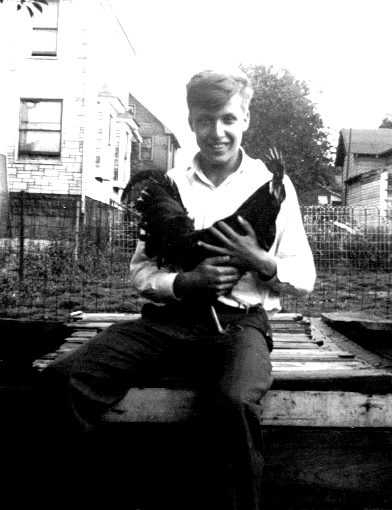 “My clucker was plucked from pethood”
by Wilbur Wallace

Shown above is a photo of Henry, a fine young rooster with me, his proud owner, holding him. The year was 1939 when I was 14 years old. Times were still hard at the tail end of the Depression, and I was never allowed to have a pet. However, because the eggs and meat would be a great help to our family’s meager budget, I was allowed to raise a small flock of chickens.

With wood salvaged from boxcars at the nearby Goodyear tire plant in East Akron, Ohio, I managed to put together a serviceable coop. Then with money saved from a magazine route and odd jobs, I purchased a dozen baby chicks and was in business.

As they matured, the hens were kept for their eggs, and the young cocks went into the pot. But I was allowed to keep the pick of the litter as a pet. I named him Henry after my father. I would play and fight with Henry, and I fear this made him quite mean. He would attack my father as he was gathering eggs, and many times I had to plead for his life.

Alas, his happy existence came to a tragic end in 1942 when, at the age of 17, I enlisted in the U.S. Navy. I had no sooner left than my father gave poor Henry to my brother-in-law, and my dear pet followed his brothers into a pot.

I never really forgave them for that foul deed.

Of course, even though Henry met an untimely death, he became the stuff of legends in our house through the years.

Thanks for sharing your story, Pop.  RIP, Henry.