Well, it all began with this: 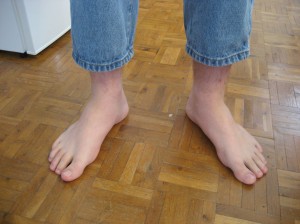 Yep, some serious high-waters and a major growth spurt.

Both of our boys were shamefully in need of new jeans. Even though we live in Germany, they still prefer to wear “American style” jeans. I’m sure the Germans have some great jeans for young men, but we haven’t been able to translate or navigate the size charts just yet. And the styles are, well frankly, a little too “European” for our tastes. Not to mention the high prices when you consider the exchange rate between Euros and the US dollar. Sheesh!

So, with the sun shining yesterday (although the snow was still on the ground) we made a three hour pilgrimage to the “LAND OF THE BIG BX,” otherwise known as the Base Exchange on Ramstein Air Base. Yes, we do have a Post Exchange on Panzer Barracks nearby. But it is rather small, and carries only a limited selection of clothing and other items. Typically, we don’t find much in the way of clothes there to suit our tastes. (No offense intended, AAFES.) At Ramstein, however, there is a very large, two-story BX which usually carries a more varied selection of clothing, especially for men and young boys. Everyone in the military community refers to it as THE BIG BX. (You have to say it with emphasis!)

Now, taking the boys shopping — and making them actually go in to the store and try on clothes is something I only attempt under extreme duress. In fact, on my list of things to do, it’s probably just one step more preferable than having a root canal. In hind sight, and considering yesterday’s shopping trip, the root canal has since moved up on the list.

(Sigh) but after much coercion and gnashing of teeth, we had both boys in the fitting room trying on jeans. This was not a particularly fun process, but out of their desperation for lack of jeans to wear to school and a bribe from us of eating dinner at the Chili’s restaurant on base, we did manage to find four pairs of jeans for each of them. 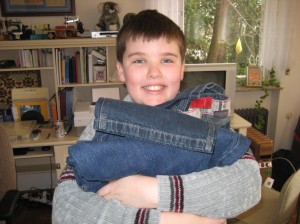 A happy kiddo with a pile of new jeans. 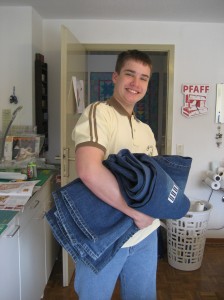 No more high-waters! This dude’s got some new duds to impress the girls.

Now, about that bribe….. the truth is, it wasn’t really a bribe at all because we were ALL in the mood for some good-old-fashioned-American-chain-restaurant-food. Not that we don’t like German food – we happen to love the cuisine here – but once in awhile we just miss eating at some of our favorite old haunts. Like Olive Garden. TGIFriday’s. Red Lobster. Brio’s. Cheesecake Factory. Abuelo’s.

(Did you know that Germans don’t really have chain restaurants as we know them in the US? Yes, they do have Burger Kings and McDonald’s. And there are even a few Subway restaurants scattered around in the larger cities. But even those fast food eateries don’t have the same menus as the we all know in the states. And the food, like french fries, taste different. That’s because they are cooked in lard. I don’t ever miss eating at a fast food joint, with the one exception of a Wendy’s single with cheese and all the fixins’.)

So it’s the little things we sometimes miss and look forward to with great anticipation. Like this: 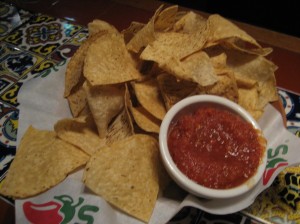 Let me just say that after the chips and salsa arrived at our table, they were inhaled in under three minutes. It looked as if the locusts had descended on Egypt. My three guys kept the waiter hopping to refill not only the platter of chips, but the glasses of soda with ice! (There is no such thing as a free refill of soda in Germany. And ice is rarely – if ever – available for your glass. We’ve just learned to live without.) 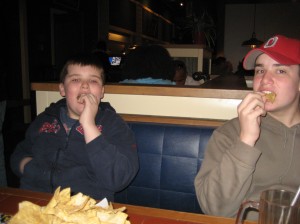 After a delicious dinner of Tex-Mex food, we got in the car and started the drive back home to Sindelfingen. 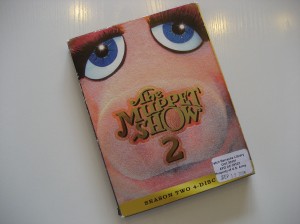 Take for instance, this DVD set. I found it at the small library on base where there are slim pickins’ for any suitable DVD’s to check out. However, this one peaked my interest, and I began humming the Muppet Show theme song all the way to the car after I checked it out. Remember this show from the mid 70’s?

When I first brought home this complete second season of the Muppet Show from 1974, both boys rolled their eyes and said, “are you kidding, Mom?” Well, after I popped the first DVD into the player, they watched those old episodes in the back seat of the car while Kent drove and we both listened from the front seat. We all just howled with laughter. The guest stars were some really great “oldies but goodies.” Milton Berle. Edgar Bergen. Madeline Kahn. Steve Martin (before his hair was white.) George Burns. Rich Little, Julie Andrews. The boys kept asking us, “have you ever heard of so-and-so?” And we’d smile and say, “Oh yes! We remember them from when we were kids.” And they just couldn’t believe it. I’m sure they think we are so – dare I say – OLD! But since they didn’t have a chance to watch all the episodes in the set, they have pleaded with me to check it out again because it is due back at the library tomorrow. Woo hoo! A major victory for Kermit and Miss Piggy. Classic humor from a simpler time.

It turned out to be such a fun day. (Well, with the exception of the trying-on-jeans-in-the-fitting-room-episode.) As my Mom always used to say, it was just good to get out of the house and “blow the stink off.” We all felt recharged. And full of chips and salsa!

This morning, I went out to inspect the snow damage to my pretty purple posies. Not only did they survive the snow storm, they are thriving! 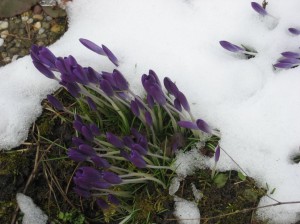 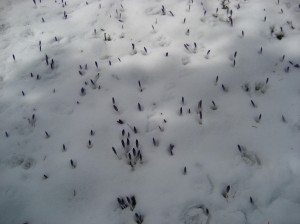 They are blooming up through the snow itself. Amazing! Which just goes to prove that we should not only bloom where we are planted, but we should bloom even in the face of adversity! 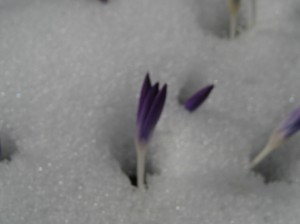 It’s the little things that mean the most. Memories of growing boys trying on jeans. Sharing a meal out with your kids while they still like hanging out with you. Laughing until your sides hurt to the antics of Jim Henson’s puppet creations. Flowers persevering even in adverse conditions.